Got a Song Request?
Let us know by clicking here 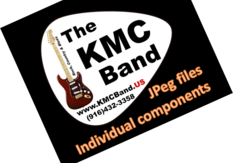 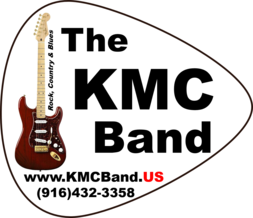 2013 & 2014: the beginning roots of the band
I thought I'd better start documenting how this band came together (before I forget how it all began).

Sometime in 2013, I think it was around October, Ed Kurata embarked on creating his own band project (after being in various bands starting in the '70s and thru various cross-country moves until the present.

During that formative 2013 year, a Craigslist ad looking for like-minded musicians to form a Classic Rock cover band, Stephan Cook (Vocals,Keyboards, Guitarist/Bassist) reached out to Ed.  Through more Craigslist ads, we recruited guitarist Brian McCommas. and went thru a few different drummers (Doug R, Bert P, David C), but eventually ended up with drummer Alan Zachary and  for a very short time a vocalist, Jan Mendoza.

We never really got anything going as this 5-piece - performing only 1 gig before deciding to disband.

The official formation of the KMZ Band happened on Thursday May 15, 2014 with our first practice as a three-piece: Ed, Brian and Alan.

​The KMZ Band performed 23 gigs throughout 2015 with repeat performances at The Brick House (Elk Grove), The Country Club Saloon (Loomis), and Auburn Alehouse (Auburn).  It was the Auburn Alehouse gigs, where we had substitute drummer Mike Cox fill in for Alan (who had previous commitments on those dates).   For a short while added in a 2nd guitarist, Jeff Balasa but he was busy with his other band The Buzztones (who Ed would fill in as bass player/vocalist from time to time).  At the Country Club Saloon, we met the manager, Mark -- who later became the manager at the Auburn Alehouse and hired us to perform in Auburn where we rocked the patio like no other band had done before (just ask the staff).  At Auburn Alehouse, we also met another manager, Kelley who would subsequently hire us two years later in 2017 @ Siino's.
2015: 23 gigs - not bad for a first year

Early in 2016 saw the departure of our founding member Alan Zachary, and the full time inclusion of substitute drummer Mike Cox.

Lots of repeat gigs at Auburn Alehouse(Mgrs Mark and Kelley remembered us well) new venues (and repeat gigs) for Bunz Sports Pub(Roseville), and an introduction to the owner of Renegade Classics Motorcycle Accessory shop (Sacramento) leading to us performing at Thunder Valley Casino for their annual Toy Run in November.
2016: 25 gigs in all

Repeat appearances at Bunz Sports Pub, Auburn Alehouse (Mgrs Mark and Kelley), our 1st gig for the Am Legion Post #383 (of many to come in later years), a beginning relationship with the Heritage Park Community (Natomas), and new venues at Siino's (Lincoln) where Kelley (formerly of Auburn Alehouse) booked us for regular gigs.  Renegade Classics had us play for not only their Xmas Toy Run (again at Thunder Valley Casino), but for their Renegade Weekend at the Dixon Fairgrounds (1500 Bikers!). We also scored our first Winery gig at Fenton Herriot Vineyards (the start of many repeat appearances) and the Fall Festival at the Folsom Green Acres (another one for repeats in the years to come).

2018 started off with the addition of Russ Stemple on drums who stepped right into the band (without any rehearsals!). Mid-year we also met Tim Burr who would sub in for drumming duties at a few of our gigs.   MIke Cox would sub for us from time to time, but was now playing with the classic country band, Lincoln Highway (Brian's other band -- and Ed would sit in with Lincoln Highway from time to time).

The KMC Band:  K=Kurata, MC=McCommas, with Russ Stemple or Tim Burr   (BTW Mike Cox sub'ed in at our Plumas Pines Gig in July)

We secured a new repeat venue in the West Sacramento area at Yolo Brewing Company, more repeats at Siino's in Lincoln (thanks Kelley), another repeat at Fenton Herriot Vineyards and yet more wineries, Miner's Leap (Clarksburg), and Rock Hill Winery (Loomis).  Our buddy Mark (of Country Club Saloon, then Auburn Alehouse and in 2018 The Brick Yard Kitchen) signed us up for many repeat performances at The Brick Yard Kitchen & Bar (Roseville).  More repeats for Green Acres Nursery (Folsom) and again at Thunder Valley for the Xmas Toy Run along with a few performances at Heritage Park Community.   We scored a great wedding gig (Thanks Gerri!)  and even a Baby Shower!

Tim Burr stepped up to be our primary drummer for the year, with Russ Stemple as our trusty stand-in when needed.  Mike Cox stepped up for us at a few Siino's gigs, a private party & The Purple Place.

Finished out the year as our strongest yet, 51 gigs played!

March of 2020 was the Worldwide COVID-19 pandemic. On March 12th, 2020 we had to cancel 12 scheduled gigs due to shutdown of venue public gatherings.  The "Shelter in Place" order became official in California on March 19th, 2020.

Repeat appearances at Knee Deep Brewing Company, The Canyon, The Purple Place - and then the COVID shutdown stopped all performances for the year.  With the exception of a three private parties, we pretty much finished the year on our lowest year, playing only 8 gigs

Rebooked for sure in 2021 for Green Acres, Bishop's Pumpkin Farm, Fair Oaks Concerts in the Park and the Newmark Kountry Klub- No Calif chapter

After the COVID-19 shutdown of practically all public performance spaces in 2020, we opened our 2021 year with a return to The Canyon (after not playing together for over 5 months) and The Purple Place.  COVID shutdowns still dampened the live playing gigs into 2021, but some venues braved the issue -- and focused on more outdoor playing opportunities. We finally get our chance at the Fair Oaks Concerts in the Park in July, being one of the 4 out of 12 bands that had to be cancelled in 2020 and rebooked in 2021; but, we had to back out because of the heat (too hot to play for Ed).
Added a new venues: The Club at Natomas Park (played that gig in 109F heat !!!).  Auburn's Club Car, Sacramento's Rock & Brews and Cante Ao Vinho in Rocklin.
Played more private parties in the Rancho Murieta area (Thanks Eric D and Kevin C, and one for Eric's brother Adam) along with our repeat appearance at Bishop's Pumpkin Farm and at the Widders Ball

Well, they say that 2022 is really 2020-Too !   So Venues have been slowly coming back...   Getting busy this year.
Great news is that we connected with TEI and booking some venues we've never gotten into -- Valencia Club, Rock & Brews, Twin Pine Casino, Moonshiners, Jan's Lounge.

Repeats at The Purple Place(who closed down this year), and The Canyon and another new venue for us, Cante Ao Vinho -- fast becoming our favorite venue.

In June, 2022, Brian snapped his bicep tendon (ouch!) so that put us on a break -- had to cancel 15 of our already booked June thru November gigs.

Recruited Steve French to fill in for us on Guitar to handle a few of the gigs already booked, including repeats at Green Acres Nursery and Bishop's Pumpkin Farm.
Looking forward to having Brian to get back in action around January 2023.